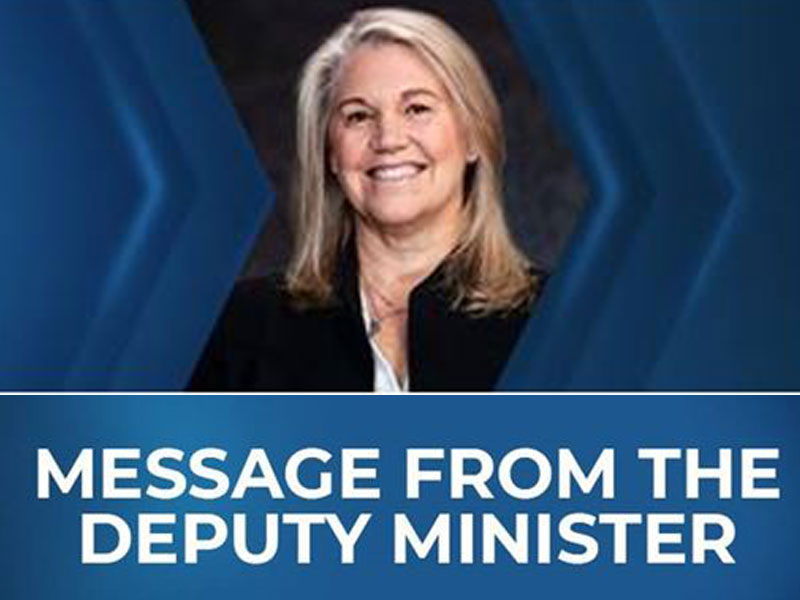 When I joined the Department of National Defence (DND) in 2017, I knew that there would be challenges: that DND was huge and unwieldy, that the military/civilian relationships could—at times—be prickly, that procurement was often slow, that infrastructure was a challenge, and that the budget was never enough.

Equally, I knew that the mission of the Defence Team is crucial to our country. That you, the public service employees and CAF members who make up this team, are dedicated, hardworking Canadians. That, as a team, you consistently rise to the occasion when asked to support at home or abroad—and that your sacrifices are not just your burdens to bear, but your families’ as well.

Over my time here, every element I’ve just noted has proven true and more. The bad, the ugly, but most of all, the extraordinarily good. The number of “asks” made of this Defence Team over the last five years—the last two in particular—have been unprecedented in times when Canada was not participating in a large overseas active mission. And through it all, you have delivered.

It has been a privilege to serve, and I am grateful for the enormous effort and outputs I’ve watched each of you—as members of this Defence Team—accomplish, often under profoundly difficult circumstances. Thank you.

To Minister Sajjan and Minister Anand: Serving as Minister of National Defence is an enormous responsibility and I thank both of you for your leadership. It has been my honour to serve as your Deputy Minister.

I would also like to thank those who, over the years, have served on my team in DMO. They are, collectively, an extraordinary group of public service employees and military officers whose resilience, good humour, and kindness belie the long, stressful hours they work to keep the machines running and the relationships working.

Thank you to the whole L1 team—my ADMs and the CAF leaders—for all you have done and continue to do in order to keep the Defence Team working effectively for Canadians and for Canada. You have accomplished a great deal and there is so much critical work ahead. I leave knowing that that work is in your good hands.

I would like to thank all of the Vice Chiefs of the Defence Staff with whom I’ve worked during my time here. In a Defence Team full of hard jobs, the role of Vice is among the hardest and each person in that role has been an exceptional leader. I am particularly thankful to have worked alongside LGen Frances Allen. The first woman to hold that role in an environment where firsts still matter, she is also exactly the Vice that we need today.

I am also thankful for the several Associate and Senior Associate Deputy Ministers who I have served with, including Bill Matthews, Gord Venner, Claude Rochette, and Nancy Chahwan. Thank you for your leadership, collaboration, frank advice, and the friendship you have shown me over the years.

The relationship between the DM and the Chief of the Defence Staff (CDS) is unique and a subject of much discussion. The CDS is the DM’s sparring partner, foil, chief support, and closest ally. It is one of the most complex relationships in government as well, one that must function for National Defence to deliver for Canadians. Whomever that partner was, we made it work and I am thankful for that effort. I know that Deputy Minister Matthews and General Eyre will do the same and will work together to lead both sides of this Defence Team. I also depart knowing that the CAF is in the steady, experienced, and ethical hands of General Eyre, all of which are critical for competent operational leadership and the cultural reform we are currently undergoing as an organization.

Finally, I wish to single out one group (even though it is not a homogenous one): the unique and wonderful women of the CAF and of DND. You are amazing. You matter. Your voices are important. And you belong here. I have been proud and honoured to watch you over the past years, as individuals, as leaders, and as a collective, increasingly embrace ownership of your space—a space that needs you to thrive and grow as Canadians need it to. The future is bright. I will keep watching your work with admiration and appreciation, as your accomplishments and voices continue to reverberate through this Defence Team, this government, and our great country.

I’ve often used the expression “Change is the cadence of our lives here at National Defence,” and I’m going to close with it today. Not only is it apt, but it also reinforces that change is not only normal, but also healthy. Grateful for my time with you, it has been an enormous honour for this Navy brat to serve as your DM. I look forward to my next challenge, and I wish each and every one of you all the best.