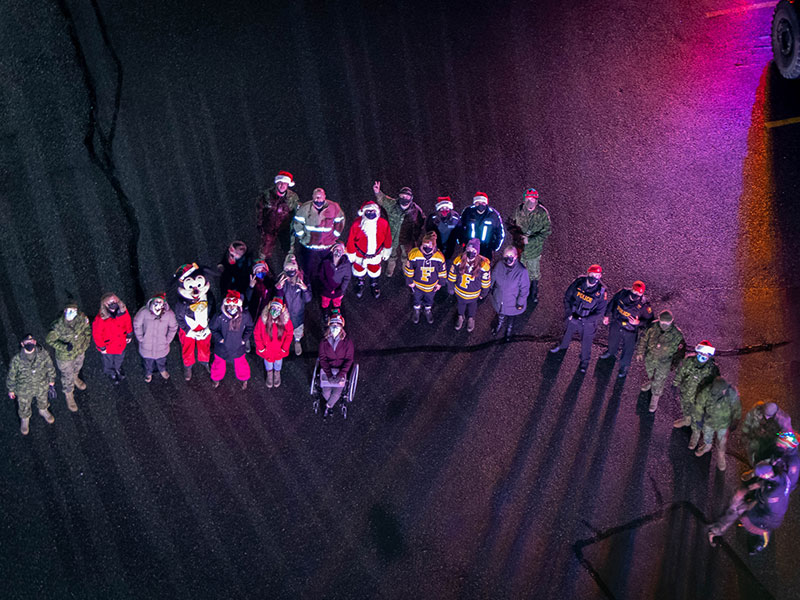 If you were driving on the Lincoln Road on December 2, you might have thought you were approaching a terrible accident; emergency services lights were on and could be seen at quite a distance. As you got closer – hey wait – you realized that it was a Christmas event at Autism Connections Fredericton (ACF). The sights, the sounds, the smells were all deliberate for persons with neurodiversity disabilities who enjoy the sensory experience the festive season offers each year.

ACF was hosting the “Spirit of Christmas,” a drive by static display of emergency vehicles, for persons with Autism Spectrum Disorders (ASDs). The event helped to raise awareness that hundreds of families are touched with neurodiversity disabilities within the greater Fredericton region. It also provided families associated with their organization a time of healing and renewed strength for the New Year.

As part of the Defense Advisory Group Persons With Disabilities, Sgt Michael Elliott (a member of 4th Artillery Regiment (General Support), RCA (4 Regt (GS)) and a father of a child diagnosed with ASD) is appointed as the Ambassador for Youth in the Atlantic Region and is tasked with developing a Special Needs Inclusiveness Program, a pilot project at Base Gagetown, to better support the military community. The Program will function by connecting military families with essential services for their dependents impacted by ASD.

In addition to Sgt Elliott’s unit, 3 Military Police Detachment Gagetown, Base Gagetown Fire Services, Fredericton Police & the Oromocto Detachment of the RCMP also participated in the event with a special appearance by Santa Claus!

The CAF’s involvement with this event represents an increasing awareness of invisible disabilities in order to better support our Defence Team and their families. As for ACF, Christmas 2021 to be forever remembered as something extraordinary.